​Thomas F. Payne built what now exists as The New Bradley Building in 1873, as a manufacturing complex for wooden furniture and casket manufacturing.  He operated the business T.F. Payne & Co. in conjunction with his brother, S. J. Payne, who owned property directly across Market Street where Market Street Grill now exists.  A written history of Wabash County proclaims, “…it is the largest miscellaneous cabinet works within 100 miles of Wabash. The establishment he has built up is the oldest business house of any kind operating in the county today.” 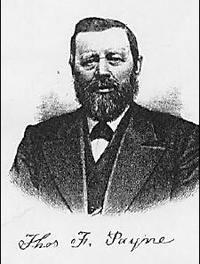 ​It would be another seven years before the City of Wabash became the first electrically lighted city in the world as Brush Arch lamps blazoned the sky from atop the Court House.  Along the turn of the 19th century, horse, wagons, and trolleys carried merchants, their goods and citizens through a vibrant downtown Wabash.  The Big Four Railroad dropped passengers off from all over America at the Big Four Depot just three blocks east.  It would not be until 1897, that ﻿Paul Dresser wrote his famous tune, “On the Banks of the Wabash”﻿. The Wabash-Erie Canal, genesis of all the great City of Wabash expansion, docked canal boats just one block south of the historical building as early as 1837.
The Bradley family completed a major renovation in 1920, converting the structure into one of the highly sought commercial properties in Wabash.  Bradley Brothers Drugstore became the anchor merchant with men’s clothes, produce and other retailers taking space at street level.  Doctors, lawyers, dentists, insurance professionals, and other businessmen occupied the second floor, while the third floor was reserved for residential tenants. 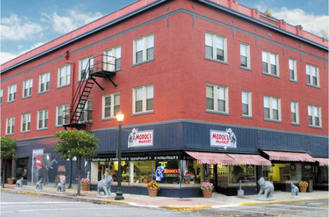 ​The building underwent a second major facelift and remodeling in 2003-2005.  Modoc's Market now occupies the space where the Bradley Drug Store suffered the famous debacle with Modoc the Elephant on November 11, 1942, which hit newspaper headlines in major cities across America.  Studios, one, and two bedroom apartments now occupy the second and third stories. In the summer of 2015, Modoc's Market gave their old coffee bar a face-lift by creating a new, more efficient coffee bar and adding more seating detail within a familiar atmosphere.

The New Bradley Building is situated within the Wabash Downtown Historic District, property now recognized by the National Register of Historic Places.  Modoc’s Market supports The Historic Landmarks Foundation of Indiana, which houses office and staff catty-corner to The New Bradley, preserving our great architectural heritage.